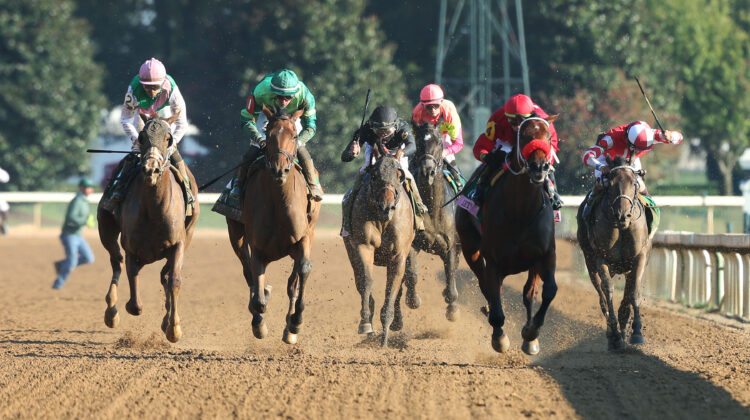 LEXINGTON, KY (June 23, 2022) – Before Keeneland hosts the Breeders’ Cup World Championships for the third time, the track will offer 22 stakes worth a record $8.75 million during its Fall Meet. The 17-day season from Oct. 7-29 will open with 11 stakes – nine of which are “Win and You’re In” events as part of the Breeders’ Cup Challenge Series Presented by America’s Best Racing – during the signature three-day Fall Stars Weekend. Keeneland has adjusted several stakes on the schedule to attract horses bound for the Breeders’ Cup, most notably moving the JPMorgan Chase Jessamine (G2) to opening day.

The Fall Meet continues an exceptional year at Keeneland, which awarded the previous meet record $7.7 million for 22 stakes during the 15-day Spring Meet in April. A total of $1.5 million of that amount came from the Kentucky Thoroughbred Development Fund (KTDF). Full fields of quality contenders drove all-sources handle to a record $219 million.

During the Fall Meet, Keeneland will present 12 stakes on grass and 10 stakes on dirt while offering multiple stakes on six days. Purses of every stakes have increased and several have doubled. KTDF is contributing $1.3 million to Fall Meet stakes purses, pending approval from the Kentucky Horse Racing Commission.

The season’s richest race is the $1 million Coolmore Turf Mile (G1), a Breeders’ Cup Challenge race that anchors opening Saturday of Fall Stars Weekend. Along with Coolmore’s first year as sponsor of the premier turf stakes, the race is again worth seven figures – a status it held from 2014, when it was Keeneland’s first million-dollar race, through 2019.

“Keeneland has planned a Fall Meet that promises to be better than ever,” Keeneland President and CEO Shannon Arvin said. “Adjustments made to the season last year, including increasing the number of stakes to 22 and boosting the final days with multiple stakes, produced an extremely successful meet from start to finish. This year, even higher stakes purses indicate the strength of the Kentucky circuit while helping Keeneland set the stage for the Breeders’ Cup World Championships, which we are proud to host for the third time.”

During Fall Stars Weekend, each winner of a Breeders’ Cup Challenge Series race receives an automatic starting position and free entry into the World Championships at Keeneland on Nov. 4-5.

Keeneland moved the JPMorgan Chase Jessamine to opening day this year after previously running the race on the following Wednesday. The new date will increase attention for the JPMorgan Chase Jessamine and place the race exactly four weeks before the Breeders’ Cup Juvenile Fillies Turf. The race also will be included in the popular Keeneland Turf Pick 3 wager on opening day.

Other stakes that day are the $600,000 First Lady (G1) Presented by UK HealthCare and the $350,000 Woodford (G2) Presented by FanDuel. Both stakes are expected to attract Breeders’ Cup hopefuls.

Stakes on the second week of the Fall Meet kick off Friday, Oct. 14 with the $300,000 Sycamore (G3) for older males racing 1½ miles on turf. Keeneland moved the Sycamore a week earlier on the calendar to serve as an option for horses pointing at the Breeders’ Cup Turf (G1).

The Bryan Station was upgraded to a Grade 3 event for 2022.

“The stakes schedule is designed to present our horsemen and fans with exceptional racing opportunities from opening day through the final card of the Fall Meet,” Keeneland Vice President of Racing Gatewood Bell said. “We’re extremely excited by the purse structure we’re able to offer and are looking forward to some outstanding competition in October.”

During the Fall Meet, Keeneland will recognize milestones of several stakes sponsors.

The Coolmore Turf Mile will mark the 25th running of a Keeneland stakes sponsored by Coolmore. The globally prominent Thoroughbred breeding operation previously sponsored the Lexington (G3) from 1998-2015 and the Jenny Wiley (G1) from 2016-2021.

Sheikh Mohammed Bin Rashid Al Maktoum’s Darley is commemorating the 20th running of the Alcibiades under its sponsorship, while Rood & Riddle Equine Hospital will sponsor the Dowager for the 20th time.