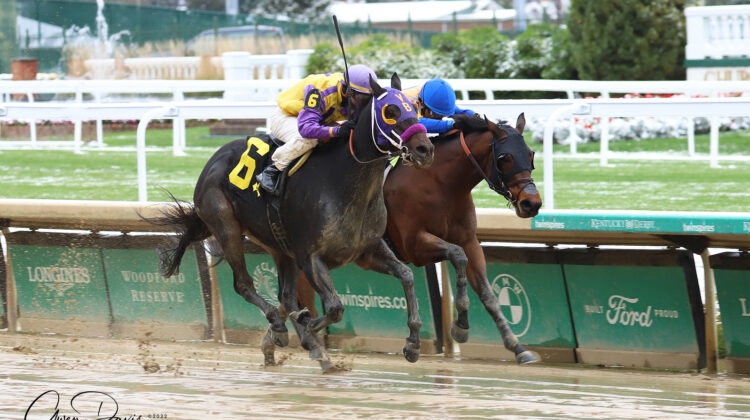 By Churchill Downs publicity department (Gwen Davis photos, including above of Petit Verdot, #6 under Florent Geroux, winning the Tom Metzen Memorial Canterbury for the first of trainer Tom Van Berg’s two Claiming Crown wins and one of three overall on the day.)

The Jewel, a 1 1/8-mile race for 3-year-olds and up that raced for a claiming price of $35,000 or less in 2021-22, headlined Saturday’s 24th annual Claiming Crown Championship Series, which was staged at Churchill Downs for the first time. Inaugurated in 1999 at Canterbury Park in Minnesota, the Claiming Crown had been staged for the last decade at Gulfstream Park in south Florida. In its Louisville debut, the Claiming Crown lured blue-collar horses from around the country.

Keystone Field stopped the teletimer in 1:53.29 over the main dirt track that was rated “sloppy” following more than an inch of early morning precipitation in the Louisville area, which included snow flurries as temperatures dipped into the mid-30s.

“We knew when it came up sloppy that a son of Candy Ride should handle the surface great,” Wycoff said.

Gerardo Corrales rode the winner for trainer Mike Maker, who collected his second Claiming Crown win on the day and record-extending 22nd victory in the championship series. Earlier, Maker won the $109,850 Glass Slipper with Paradise Farms Corp.’s Invaluable ($8.18), who was ridden by Luis Saez.

“We knew this horse had good turf form but we thought we could improve him getting him on the dirt,” Maker said. “He had a great trip today and handled the sloppy track very well.”

“When I bet he was 10-1 and got backed pretty heavily after that,” Wycoff said. “I left the (Keeneland November Breeding Stock Sale) a few hours ago and it’s a great sale but winning races is better. … (Intrepid Heart) ran well on his outside but we ended up getting the jump on him from the inside.”

Keystone Field became eligible for the Jewel while winning a Jan. 7 race at Santa Anita while running for a $25,000 claiming tag. Previously owned by Perry R. Bass II and Ramona S. Bass and trained by Richard Mandella, he was privately purchased following a fourth-place finish in a $25,000 starter allowance on March 19 and came to Kentucky. This marked his third victory in five dirt starts since the purchase.

“I was delighted to see the Claiming Crown come to Churchill,” Wycoff said. “We actually purchased this horse from California to run it back on the dirt. That usually isn’t what we do, it’s usually the other way around (dirt to turf).”

Keystone Field is a 7-year-old gelded son of Candy Ride (ARG) out of the In Excess (IRE) mare She’s an Eleven and was bred in Kentucky by C R K Stables LLC.

Also on the Claiming Crown card, trainer Tom Van Berg and jockey Florent Gerouxteamed to win their second Claiming Crown race of the day when The Queens Jules ($19.14) determinedly surged back from the inside rail to hang a nose on Divine Leader in the $138,755 Rapid Transit. Earlier, Petit Verdot ($6.42) won the $160,600 Tom Metzen Memorial. Both horses were owned by Van Berg’s partnership Grit to Glory Racing. Van Berg also saddled the winner of the first race, an $8,000 claiming event, with Justin’s Quest ($4.66) for three wins on the day.

Paco Lopez rode two winners to extend his Claiming Crown win record to 16. He won the $167,150 Tiara aboard Out of Sorts ($14.08) for owner John Fanelli and trainer Bobby Mosco, and concluded the program with a triumph aboard FAS Racing (Adis Smajlovic)’s Palace Coup($4.14) in the $160,010 Emerald for trainer Joe Sharp, who also trains Intrepid Heart.

Out of Sorts was one of two horses who shipped in from Pennsylvania’s Parx to win a Claiming Crown event. The other was Gregg O’Donnell’s Hero Tiger ($10.32) in the $106,899 Ready’s Rocket Express for trainer John Kirby and the second Claiming Crown win of the day for Saez.

All other Claiming Crown winners were based in Kentucky, including Jeff A. Hiles and Thorndale Stable LLC’s Time for Trouble ($18.08), who won the $108,433 Iron Horse Kent Stirling Memorial for Hiles and jockey Joe Talamo.

The Canterbury Tom Metzen Memorial, Tiara and Emerald were transferred from turf to dirt because of snowfall.

Kirk Wycoff (owner, Keystone Field, winner) – “We knew when it came up sloppy that a son of Candy Ride should handle the surface great. When I bet he was 10-1 and got backed pretty heavily after that. I left the (Keeneland November Breeding Stock Sale) a few hours ago and it’s a great sale but winning races is better. I was delighted to see the Claiming Crown come to Churchill. We actually purchased this horse from California to run it back on the dirt. That usually isn’t what we do, it’s usually the other way around. (Intrepid Heart) ran well on his outside but we ended up getting the jump on him from the inside.”

Mike Maker (trainer, Keystone Field, winner) – “We knew this horse had good turf form but we thought we could improve him getting him on the dirt. He had a great trip today and handled the sloppy track very well.”

Florent Geroux (jockey, Petit Verdot, winner) – “He handled the slop very well. He was able to settle off the early speed. He got stopped for a little bit on the backside but I was able to get outside and he kept fighting to the wire.”

Tom Van Berg, (trainer, Petit Verdot, winner) – “This plan was actually just a few days in the making. We were only running if this race came off the grass. This horse likes slop and I was a little concerned when he got shut off on the backside. Once this horse gets outside he does his best running. I didn’t even have to give any instructions to Flo (Geroux). He fits this horse very well and knows what to do. It’s been a plan to get my partnership to a day like this for two years and I’m so happy we were able to get there.”

Mike Maker, (trainer, Invaluable, winner) – “She’s very consistent and we thought she would like this racetrack. So, when it came up a sloppy track, it didn’t hurt my feelings any. First thing that comes to mind when I remember that I have the record at 20 wins in the Claiming Crown is, ‘Damn I’m old.’ I remember winning my first one at Ellis Park in 2007. The weather was the opposite that it was today. It was about 100 degrees outside. It’s a great event and it gives the opportunity for a lot of these blue-collar horses to shine on the big stage.”

Jeff Hiles, (trainer, Time for Trouble, winner) – “He’s the picture of consistency. He’s by English Channel so the turf is probably better suited for him. Even though he set the track record at Belterra he’s runs well on the dirt as well. So, we thought we’d give him a shot in this race. Joe (Talamo) gave him a perfect ride and he handled the slop great. We won this race last year with Blue Steel so it was great to win it again.”

Bobby Mosco, (trainer, Out of Sorts, winner) – “I have to give all the credit to (owner) John (Finelli). It was 18 minutes to post until her last race and he called me to say, ‘Hey, we’re claiming a horse in this race for the Claiming Crown.’ I didn’t know the horse at all and didn’t have anyone over at the office to claim the horse. So, we hustled over there and got the horse. I’ve been to the Claiming Crown a few times at Gulfstream and the horses I brought there were OK but I knew coming into this race this horse was training phenomenal. We thought she was a turf horse but has run great in the slop. Now we have options this winter to run without turf racing. We just have to hope it comes up sloppy.”

Luis Saez (jockey, Hero Tiger, winner) – “He ran a really big race. The key with him seems to be making sure he has a target to run at. He got that today. At the top of the lane it was a battle but he really separated himself from the rest of the field.”

John Kirby (trainer, Hero Tiger, winner) – “I rode on the van down with this horse and it was such a great performance this afternoon. Everything went really smooth and the stars truly aligned. Luis (Saez) rode him great. The horse really has the biggest heart and it showed today.”

Florent Geroux (jockey, The Queens Jules, winner) – “This horse doesn’t like kickback and we were able to get in front and in the clear. He was game as could be on the inside and didn’t want to let (Divine Leader) get by.”

Tom Van Berg (trainer, The Queens Jules, winner) – “It’s been a great day for everyone involved. This horse has won on an off track before and handled it great today. Flo (Geroux) was able to keep him in the clear and away from the kickback and I think that was the deciding factor. He was so game on the inside in deep stretch, too.”

Joe Sharp (trainer, Palace Coup and Big Agenda, winner and runner-up) – “It was a great race and I’m proud of both of our boys. It was fun watching the race and when they turned for home you could sort of see the result panning out. It was an exciting but frustrating day too with Intrepid Heart just falling short (in the Jewel). The horses, for the most part, all showed up. The weather was unfortunate but (Palace Coup) drawing into the race as a main track only really worked out well.”